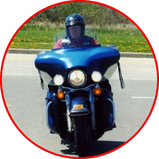 ​I suppose it all began around the frequent bonfires we had on the beach as kids. I was always being asked to tell one of my terrifying tales and my friends would listen to my words dancing in the flames. You might say I became the headliner at age ten.

The first review of my work came from my fourth grade nun who, after finding my notebook on the floor threatened to expel me for wasting time writing such violent stories. She berated me in front of the class in such detail, it was obvious that she had read the entire thing and that it had a solid impact on her. What more can a writer ask. I got even with her by putting her in one of my novels... and making her nice.

My background is not in literature. I come from the world of engineering. My life has been one constant adventure starting out as a hot-rodder when I was a teenager and moving on to sky diving as soon as it was introduced as a sport. Then there was motorcycle racing on dirt or asphalt in the summer and on the ice of frozen lakes in the winter. Soon I discovered hydroplane racing, the big automotive powered boats that make U-turns side by side at a hundred miles an hour on narrow rivers. I stayed with that for over thirty years eventually finding my way into the Detroit River Racing Hall of Legends. In my spare time I took up scuba diving and spent my off weekends finding shipwrecks in the Great Lakes. It's been a fun life and every now and then I find a space where personal experience finds its way into my stories.
Dennis Collins
3433 Port Austin Rd.
Port Austin, MI 48467
(989) 738-0339 (home)
(989) 963-0052 (Cell)
denniscollins@theunrealmccoy.com
Site powered by Weebly. Managed by College Web Pro LLC